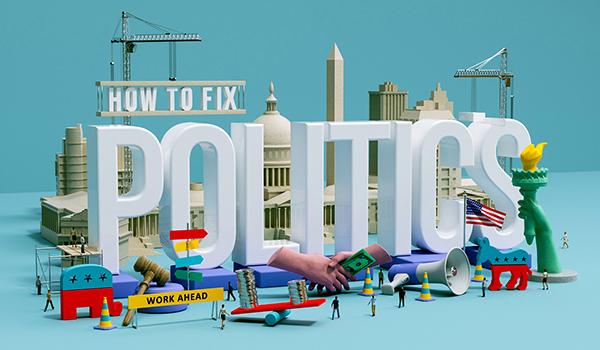 Alexandra Hudson is a former civil servant and a research fellow at the American Institute for Economic Research. She is working on her first book, about American civic renewal.
“Patriotism is the last refuge of a scoundrel,” held Samuel Johnson. This unflattering sentiment has been adopted widely by today’s chattering class. Some claim that, even at its best, love of country is merely the purview of the undereducated; others argue it is actively harmful. Yet in a moment of deep social and political division—when many question whether to be proud of being American—it can no longer be taboo to celebrate and discuss our national history and identity.

Popular art might just be the answer. Although patriotic art often gets a bad rap—it’s often derided as mawkish or uncritical—I’ve seen how it can bring people together.

Over the summer, I curated an art and rare books exhibit at Indianapolis’ Harrison Center meant to encourage viewers to confront our country’s shortcomings while also appreciating the good in our past. The manuscripts in the exhibit—on loan from The Remnant Trust, a private collection of rare books—ranged from a first English translation of Plato’s Republic to an original printing of the Gettysburg Address. Local artists responded to and interpreted the themes of these manuscripts in different visual media. For instance, we paired an original printing of Mary Wollstonecraft’s A Vindication of the Rights of Woman with a local artist’s oil painting of Madam C.J. Walker—an African-American entrepreneur who became one of the wealthiest self-made women in U.S. history, and who was an important advocate for racial equality and women’s rights.

At the opening of our exhibit, I spoke with an African American woman about Walker’s legacy, reflecting on the reality that there are villains in our history—but also heroes who fought against slavery, institutional racism and the marginalization of women. By reminding us of our shared past, art can galvanize Americans to strive to more perfectly live up to our ideals. Just think of the runaway success of Hamilton or the enduring popularity of the Statue of Liberty.

Artists can use their craft to provoke and heal in creating this type of art; state and local governments can subsidize their art in the interest of social cohesion. Individual Americans can recommit to studying our past. As former Congressman Lee Hamilton said to an audience at the exhibit, “The primary duty of citizenship is to make your community a little bit more beautiful when you leave than when you got there.”